An oasis for all communities and religions – President 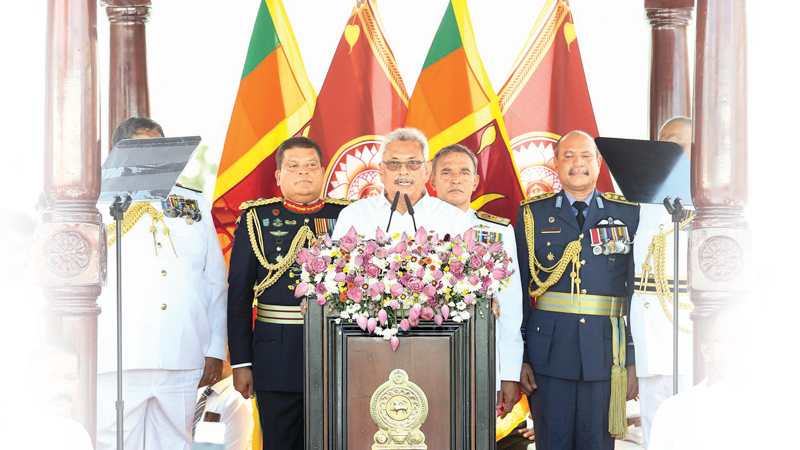 A new government that could implement the policies envisaged in the SLPP election manifesto during his tenure to develop the country, will be appointed soon, newly elected President Gotabaya Rajapaksa told the nation yesterday.He made this observation delivering his maiden formal address to the nation from the sacred stone-paved precincts (Salapathala Maluwa) of the Ruwanweli Mahaseya, soon after taking oaths as the seventh Executive President of the Republic before Chief Justice Jayantha Jayasuriya.

Surrounded by the dignitaries of the State, the Forces’ commanders, senior SLPP leaders, including former President and elder brother Mahinda Rajapaksa, and watched over by the Maha Sangha, President Rajapaksa took his oath of office in the morning calm and quiet of the precincts of the venerated Maha Seya.
In his speech to the nation, the President assured his people that he would fulfill all the policies he had envisaged in the election manifesto and establish a rule that would guarantee the rule of law and justice, creating “an oasis where all communities and all religions could live with dignity”.He added that the responsibility of implementing the vision of prosperity formulated by the people for the people was in his hands and assured that he would empower the state security agencies to protect the country from terrorism, the criminal underworld, child abuse, and drug menace among other threats.

He also requested the Sinhala, Muslim and Tamil communities to join hands together with him to develop the country as one nation.

I am extremely fortunate to address you from the Sacred Precincts of the Ruwanweli Maha Seya in Anuradhapura, which enshrines the Sacred Relics of the Buddha. I have received the opportunity of addressing the nation before the statue of great Warrior King Dutugemunu due to the historic mandate given to me by the majority of citizens. I address you today as the Executive President of our dear Motherland, the Commander-in-Chief and the Defence Minister who will ensure security for all. The blessings of the Maha Sangha from all corners of the country was instrumental in my election victory.

I knew from the beginning that the majority Sinhala community would be the decisive factor in this triumph.

While I knew that it is possible to emerge victorious with the sole backing of the Sinhala community, I appealed to the Tamil and Muslim communities too to become partners of that victory. However, the response to this appeal was not satisfactory to the level I expected.

But as the President of all Sri Lankans, I once again appeal to our Tamil and Muslim brethren to join together as true Sri Lankans for the sake of the country’s future prosperity. I express my gratitude to all those who voted for me. I also wish to thank all those who voted for the other candidates as well, honouring the best traditions of democracy and universal franchise.

Haling from a Sinhala Buddhist family in the South, I was educated at Ananda College, Colombo, one of the leading Buddhist schools in Sri Lanka.

The Buddhist philosophy is infused into my thoughts and conduct. Buddhist philosophy calls for a righteous rule that respects law and order, justice and fairplay. It will be an administration that will be an oasis for all communities and religious groups. I will be dedicated to protect and nurture the Buddha Sasana during my tenure.

We must protect the Sinhala culture and heritage that has a history of thousands of years. State patronage will be given to protect our age-old moral values, traditions and rituals and oneness.

We will always protect the right of all Sri Lankan citizens to live in peace and harmony with dignity whilst protecting their religious and ethnic identities.

I also wish to express my heartfelt gratitude to the fifth Executive President Mahinda Rajapaksa, who was a pillar of strength during the election campaign, for his commitment to ensure this victory.

I also wish him a happy birthday. My thanks are also due to Basil Rajapaksa, the founder of the SLPP concept and the party’s National Organiser who was a great source of strength for my victory.

I also wish to thank the SLLP Chairman, General Secretary and other officials, people’s representatives and members.

I also extend my thanks to the leaders and members of all other political parties who rendered a yeoman service to my elections campaign. This election saw an unprecedented level of enthusiasm among citizens representing various segments of society.

Hundreds of thousands of people who had never worked for a political party previously, volunteered their time and resources for our campaign. I appreciate the role played in the election campaign by professional organisations like the Viyath Maga, various national organizations, business community, academics, artistes, social media influencers, expatriates who came to Sri Lanka to vote and the youth. I have not met most of them personally, but they did their duty for the country. I thank them all.

Now our responsibility is to get together as a nation in order to build this country.

The voters have given me a mandate to implement my manifesto titled “Vistas of Prosperity” which is a people’s programme envisioned by the people for the people.

I expect to deliver all the pledges in this manifesto during my tenure. I consider ensuring national security as a fundamental facet of governance. We will implement a national security mechanism that will free the country of terrorism, underworld activity, extortion, drug trafficking, violence against women and children and all types of crime. We want to maintain cordial relations with every country.

We want to remain neutral in our foreign relations and stay out of any conflicts among the world powers. I urge all countries to respect our country’s sovereignty and unitary status in having diplomatic relations.

It is our responsibility to protect the environment for posterity. We will be fully committed to achieve the United Nations Sustainable Developemnt Goals (SDGs).

From the start of our campaign, we were committed to change the prevailing political culture.

We set an example to all others by not slinging mud, not using polythene and plastic and generally adhering to environmental protection guidelines. I aim to continue these trends in respect of governance. I pledge to build a truly committed, efficient and professional public service that will respect the supremacy of the law, protect social justice and be free of fraud and corruption. As pledged in the manifesto, skills and knowledge will be the foremost factors considered in making various appointments in our administration. The Government should always set an example to society. Professionalism and efficiency should be the cornerstones of Government administration.

Meritocracy and technocracy should be promoted at all times. Corruption will never be tolerated under my administration.

We have to discharge a host of responsibilities towards the future generation. We will give priority to arm them with knowledge and uplift them with skills to gain the maximum benefit from the new global economic trends.

The use of new technology will be expanded in every sector to ensure the preparedness of our citizenry to face the challenges of the 2st century. I seek your help in building a just and law-abiding society that protects moral values and discipline. My responsibility as the President is to serve all the people in the country. Hence, I will strive to protect the rights of everyone – those who voted for me and those who did not.

I shall always be dedicated to uphold the aspirations and expectations of the people in line with our manifesto.

We have a lot to do in the years ahead. There is a lot of work to be done and not much time to do it. But if there is a will, there is a way.

There is no challenge that we cannot surmount. We have the vision to build the nation. The plans in this regard have been included in the Vistas of Prosperity manifesto.

I am your Executive President. I will not hesitate to use such executive powers for the benefit of the country at any time.

I will thus form a new Government that can work in accordance with my policies and implement the historic mandate given by the people to build a prosperous nation. I love my country. I am proud of my country.

I have a vision for my country. I appeal to all patriotic Sri Lankans to join me in my journey to build a prosperous nation for the future generations.”