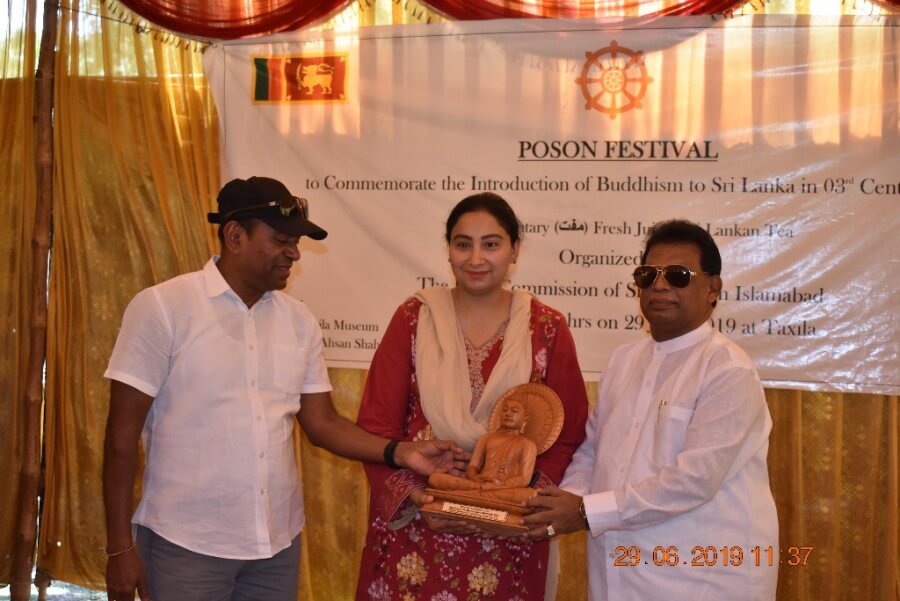 A Buddhist historical and religious event known as Poson or Poson Full-Moon Poya Day was observed in Taxila Museum on Saturday. This is the first-ever Poson Festival celebrated in Pakistan. The event was organized by the Sri Lanka High Commission in collaboration with Taxila Museaum. The event was well attended by men, women, and students who visited Taxila Museaum which showcases several hundreds of Buddhist Artifacts and statues.
With back to back rhymes of Poson devotional songs; free food, juices and Ceylon tea were provided as complementary to the visitors to mark the day which is observed to celebrate the arrival of Buddhism in Sri Lanka in the 3rd century BC.
Sri Lankan High Commissioner Noordeen Mohamed Shaheid, who was the chief guest, told the participants that the day was a festival of great historical and religious significance celebrated in Sri Lanka every year and being observed for the first time in Pakistan. Many dignitaries who visited the stall (Dansala) requested the High Commission to continue with such events to promote Buddhist Religious and cultural practices in the future.
The High Commissioner further stated that the said Poson held on the full moon day of June commemorated the occasion over 2,000 years ago when Arahat Mahinda, son of Emperor Asoka of India, converted King Devanampiyatissa to Buddhism.