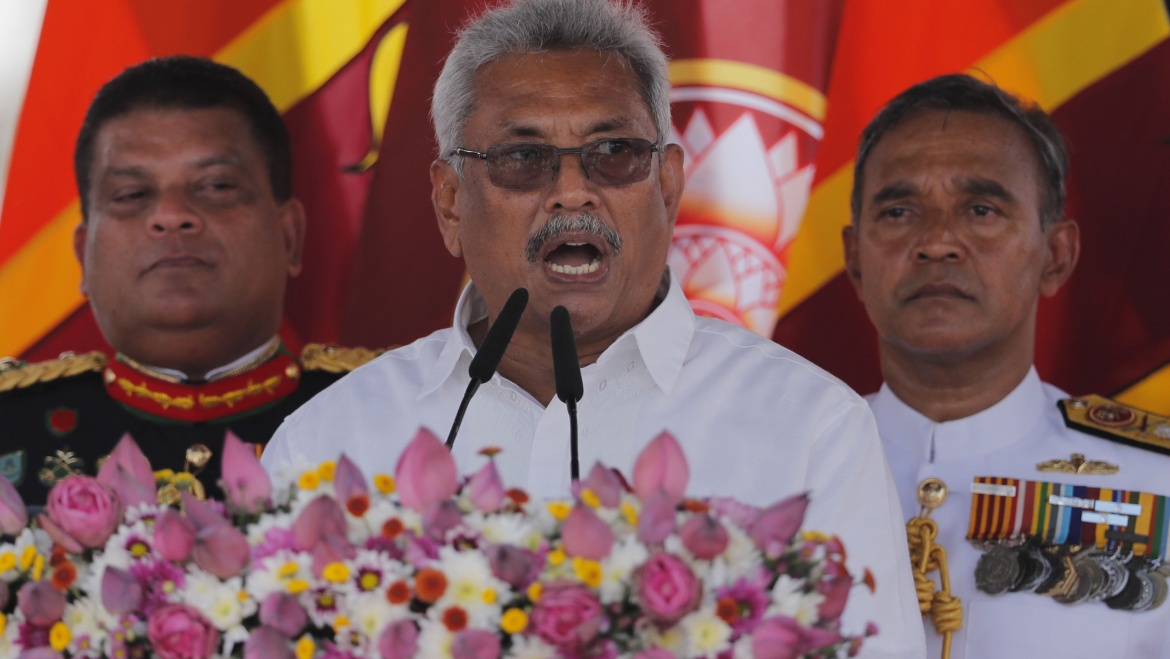 Gotabaya Rajapaksa was sworn-in as the 7th Executive President of Sri Lanka a short while ago, before Chief Justice Jayantha Jayasuriya and in the presence of Tri-forces commanders. The ceremony is taking place at Ruwanwelisaya Stupa premises in Anuradhapura. The event is graced by Opposition Leader and Leader of SLPP Mahinda Rajapaksa, Prime Minister Ranil Wickremesinghe SLPP National Organizer Basil Rajapaksa, leaders of political parties, parliamentarians, and many other distinguished guests.Following the swearing-in, Gotabaya Rajapaksa delivered his first address to the nation as the President of Sri Lanka. Subsequently, he sought the blessings of the Maha Sangha.

Gotabaya Rajapaksa was born on 20th June 1949 to former Cabinet Minister D. A. Rajapaksa and Dandina Dissanayake Rajapaksa.He is the brother to Sri Lanka’s 5th Executive President and current Leader of Opposition Mahinda Rajapaksa, former Speaker of the Parliament Chamal Rajapaksa and former Cabinet Minister Basil Rajapaksa.He joined the Sri Lanka Army in 1971. During his military service, President Rajapaksa earned a Master’s Degree in Defense Studies from the University of Madras and underwent advanced training in Pakistan, India and the USA. He was awarded the Rana Wickrama Padakkama and Rana Sura Padakkama Medals for commanding many anti-terrorist operations in the North and East of Sri Lanka.
President Rajapaksa, who immigrated to the United States, returned to the country in 2005. He was subsequently appointed as Secretary to the Ministry of Defense.He played a major role in ending the three-decade-long terrorist conflict in Sri Lanka. Following the end of the war in 2009, he was awarded Doctor of Letters (Honoris Causa) by the University of Colombo.
He then formed “Viyathmaga” (Professionals for a Better Future) a non-profit organization comprising professionals, academics and entrepreneurs in 2016.In August 2019, Gotabaya Rajapaksa was selected as the presidential hopeful of Sri Lanka Podujana Peramuna (SLPP), led by Mahinda Rajapaksa.In the Presidential Election 2019, held last Saturday (16), Gotabaya Rajapaksa secured a record number of 6,924,255 votes (52.25%) and was accordingly elected as the 7th Executive President of Sri Lanka