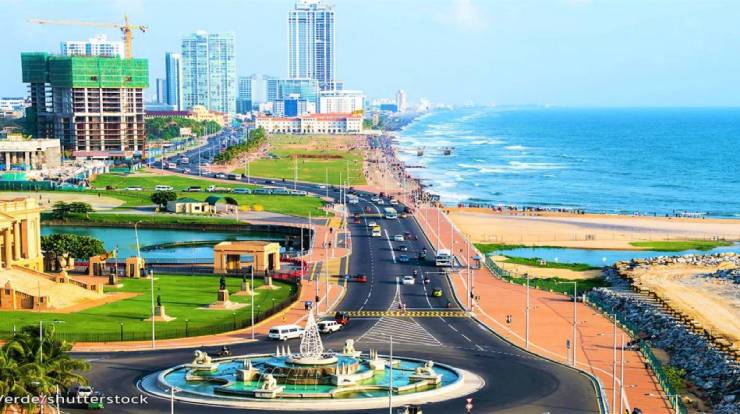 Sri Lanka is classified as a lower, middle-income country with a transitional economy. To date, the country has focused on the manufacturing and service sectors. To expand the Sri Lankan economy, the government is now restructuring in order to promote a stable economy, which is reflected in the recent growth rates of all key sectors, including tourism.

The government has prioritized an economic model driven by the private sector, trade, and Foreign Direct Investment. In addition to fiscal consolidation, which has already shown improvements in the budget deficit, the government has passed a new Inland Revenue Act, resulting in revised tax rates and a three-tiered tax structure. The latest budget also makes way for listed companies with foreign ownership to have fewer restrictions on land ownership rights.

In the coming years, the Sri Lankan government plans to transform the country by developing 5 strategic hubs – a knowledge hub, a commercial hub, a naval and maritime hub, an aviation hub, and an energy hub – which all encourage and facilitate further economic expansion. The tourism sector is a key growth area for Sri Lanka. The country’s National Export Strategy 2018 – 2022 aims to focus on six sectors including wellness tourism, which will lead to new opportunities and further growth prospects for the tourism sector in the future.

By 2020, Sri Lanka intends to improve its business climate ranking in the World Bank’s Ease of Doing Business Index, to be amongst the top 70 countries in the world. At present, Sri Lanka is ranked 64th overall out of 136 countries in the World Economic Forum’s 2017 Report. It ranks 20th in competitiveness, which is the time and cost of regulatory compliance. To reach our goal of having a competitive and streamlined business environment, the government, supported by the World Bank, has devised a ‘Roadmap for Investment Climate Reforms’ which focuses on areas that require extra support. Eight areas have been identified and prioritized for improvement. They include: i) construction permits, ii) property registration, iii) obtaining credit, iv) protecting minority investors, v) trading across borders, vi) enforcing contracts, and vii) resolving insolvency.

The government of Sri Lanka has also begun to introduce new legal reforms and regulatory / procedural changes to help improve the overall business climate. For example: Stamp duties have been removed from newly issued shares, company registration is in the process of being streamlined, and Sri Lanka Tourism Development Authority (SLTDA) as well as the Board of Investment (BOI) have set up One Stop Units with re-engineered investment approval processes to reduce investor requirements, development timeframes, and the cost of implementing projects in Sri Lanka. In addition, a number of government agencies such as the Registrar of Companies, the Urban Development Authority (UDA), SLTDA, and BOI have started to introduce electronic systems, making it easier for the private sector to link with public agencies and submit investment applications.

The Constitution of Sri Lanka intrinsically promotes the safety of investments. Article 157 of the constitution guarantees the safety of investment protection, treaties, and agreements. In recent years, several laws in the country have been updated to promote a more ‘open investment climate’. The Exchange Control Act was recently repealled and a new ‘Foreign Exchange Act’ was introduced in 2017. Under this Act, foreign investments have been further liberalized by permitting: i) total foreign ownership, ii) land lease opportunities for foreign investors, and iii) no restrictions on the repatriation of earnings. This law also provides for the safety of patents and intellectual property.

The BOI is permitted to provide incentives including tax holidays, tax concessions, and exemptions from the customs duty and exchange control laws. Total foreign ownership is permitted for investments in most sectors of the economy, and there is no restriction on foreign exchange transactions related to current account payments.

Sri Lanka serves as the gateway to South Asia, Africa and Europe, and it is strategically located at the intersection of where east and west sea routes connect. The government is intent on developing the country as a leading regional Aviation, Navigation and Trading Hub in South Asia. According to the Lloyds Register, the Colombo Port ranks as the Number 1 port in South Asia and Number 26th in the world. Currently, thirty-three major shipping lines call at Colombo Port.

The Bandaranaike International Airport (BIA) is a regional hub of air transportation and is considered to be Number 1 in South Asia. Major airlines operate frequent flights from BIA to principal cities in Europe, Middle East, the Far East, Australia, and the Indian Sub-Continent. The BIA also provides air connectivity to major routes and over 100 cities around the world.

The south of Sri Lanka is currently being developed with the new Hambantota Port and its associated Logistics Hub and Industrial Zones. The surrounding area will undergo extensive urban development in order to house these facilities, which brings untapped opportunities for new investors.

Sri Lanka benefits from a number of Free Trade Agreements and preferential trade access. The country has a trade agreement with both India and Pakistan, giving duty free access to over 1.3 billion consumers from the island, demonstrating political goodwill and commitment between Sri Lanka and its geo political neighbors. Sri Lanka has signed a Free Trade Agreement with Singapore, which is a comprehensive and advanced partnership covering a wide range of industries and signals Sri Lanka is open for foreign business. Under Sri Lanka’s South Asian Free Trade Area (SAFTA) and the Asia–Pacific Trade Agreement (APTA), investors can gain preferential trade access to two of the largest blocs in the region.

Private, public, and public-private partnership investment programmes have been implemented in Sri Lanka to improve the country’s infrastructure facilities. Sri Lanka’s infrastructure development has been growing continuously over the past years, resulting in efficient and modern sea ports, airports, a growing network of roads and highways, high quality telecommunication networks, and reliable utility services. Additionally, the government plans to further improve the public transportation system, by constructing new rail tracks, electrifying certain sections of the railway systems, and introducing a Light Rail Transit in Metro Colombo. The government also plans to: i) establish a multi-modal Transport Hub, ii) introduce waste to energy projects, iii) continue development on East and West Terminals of the Colombo Port, and iv) modernize the Bandaranaike International Airport. The government is actively encouraging private sector investment in infrastructure on the basis of Build, Operate and Own (BOO) and Build, Operate and Transfer (BOT) models.

The Ceylon Electricity Board (CEB) is the main supplier of electricity to the National Grid. The government recognizes that the energy sector is a key driver in developing infrastructure in the country, and as such, has endorsed a long-term development agenda for government and private sector partnerships.

The government of Sri Lanka promotes ICT innovations and development and has taken measures to transform Sri Lanka into a digital economy.

The government has given prominence to road development. The Road Master Plan focuses on constructing highways, widening main arterials, and reducing traffic congestion. Construction of the Outer Circular Highway (OCH) is in progress. The OCH is located approximately 20 km away from Colombo city center and connects radial routes. The Central Expressway connecting Colombo to Kandy is also in progress and will be completed in three stages.

Sri Lanka’s literacy rate of 92.2% is the highest in South Asia and one of the highest in the developing world. Most of the country’s workforce is comfortable with high tech production and services, and approximately 50% of the students who have completed their higher education are trained in technical and business disciplines. English is widely spoken throughout Sri Lanka and is well understood. Sri Lanka’s social development indicators are ranked amongst the highest in South Asia and compare favourably with other middle-income countries.

In Mercer’s Quality of Life survey (2017), Colombo ranked Number 1 in the South Asian Region. Sri Lanka leads the South Asian region in terms of high human development indicators – high literacy and national health rates. There is a wide selection of comfortable housing options in Sri Lanka, ranging from high-rise buildings and full-service condominiums, to spacious urban dwellings. Sri Lanka hosts excellent schools, which offer both national and international curriculums. In addition, there are many internationally recognized hospitals and clinics in the country.

Sri Lanka offers residents and visitors a spectrum of experiences, balancing a cosmopolitan living environment in the city with a charming, relaxing experience in the rural, countryside. Colombo offers abundant nightlife, cafes, art, theatre, and wellness experiences. Amazing hotels, wildlife and nature reserves, botanical gardens, beaches, archaeological ruins, and religious temples and shrines are scattered across the country and well worth a visit.